From May 1, Europe direct Karlovac (ED Karlovac) , with an excellent project entered the new generation of ED centers and thus ensured the work as an "extended arm" of the European Commission for Karlovac County until 2025. Let us remind you, Europe direct Karlovac in Karlovac County has existed since 2013 and when it was opened, it was the first such center in Croatia, and many novelties were announced in the new perspective. The first novelty is already visible in the name, so the current Europe direct information center Karlovac (EDIC Karlovac) changed its name to Europe direct Karlovac. ED Karlovac is no longer just an information point, but wants to go directly among citizens, to schools, institutions and other organizations, in order to promote the priorities of the European Commission. The slogan under which it operates in the coming period is "Meet, ask and discuss".

In addition, in the coming period, larger funds are intended for it, and accordingly, more engagement is expected around the main priorities and tasks.

The five basic tasks that will be before ED Karlovac in the coming period are shown in the following graph. 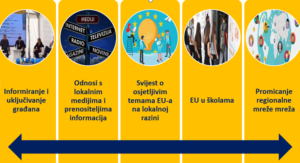 By the end of the year, ED Karlovac will focus on two basic priorities of the European Commission: the European Green Plan and Europe ready for the digital age. The plan is to organize a series of events, workshops, forums and other activities, and it will inform citizens on a daily basis via social networks and the web.